Motorola is leaning toward adding a stylus to its smartphone lineup in 2022. To be clear, the company already had a Moto G lineup that includes a stylus, but the Lenovo-owned company recently released the Motorola Edge Plus which includes support for a digital pen. And, as of a week ago, you could buy the $80 Folio + Stylus accessory required to take advantage of the capability — assuming it’s in stock.

In Feb. 2022, Motorola also updated the base model Moto G Stylus, followed by announcing the Moto G Stylus 5G near the end of April. The $500 smartphone combines what’s made the standard G Stylus appealing — the affordable price tag — with better connectivity, an improved display, and better performance.

I’ve been testing the Moto G Stylus 5G and have found it to be a capable phone that delivers on all of its promises. It’s a more affordable alternative to the older Galaxy Note or Galaxy S22 Ultra, but, as expected, it’s not a 1:1 replacement. 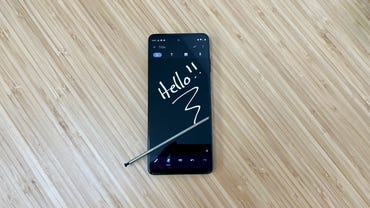 The design of the Moto G Stylus 5G checks a lot of boxes you’d normally find on the specification sheet for a flagship phone. It has a 6.8-inch FHD+ display with a 120Hz refresh rate that helps keep scrolling smooth and ensures writing on the screen looks crisp. Centered at the top of the display is a hole punch cutout for the 16-megapixel front-facing camera. Along the right edge of the phone are the volume rocker and the fingerprint sensor that’s embedded into the sleep/wake button. You simply rest your finger on the sensor and it unlocks the phone.

The left edge of the phone is bare, save for the SIM and MicroSD card combination tray. You can add up to an additional 1TB of storage to the phone via MicroSD card support; however, it will come with a 256GB card pre-installed.

On the bottom of the phone is a 3.5mm headphone jack, and a USB-C port used for transferring data to and from your computer as well as charging the phone. The bottom is also where you’ll find the built-in silo for the stylus. Press on the top of the stylus to remove it, and then slide it back in place for easy storage.

On the back of the phone is the rear-camera array that includes three total cameras. There’s a 50-megapixel main camera, an 8-megapixel ultra-wide-angle camera that doubles as a macro camera, and a 2-megapixel depth sensor. The lenses are stacked vertically on the left side of the housing, which has become a common layout amongst Android device makers.

The overall design of the Moto G Stylus 5G isn’t anything new or innovative. Actually, it looks a lot like the Motorola Edge Plus, with just a handful of changes. I found the phone to be thicker than I anticipated, which can make it slightly awkward to hold given how tall and narrow it is.

There are two color options. I have the Steel Blue version, but there’s also a Seafoam Green option.

Inside the Moto G Stylus 5G is Qualcomm’s Snapdragon 695 processor that provides mmWave and Sub6 5G connectivity. Other connectivity features include Wi-Fi 802.11ac and Bluetooth 5.1. All of that’s powered by a 5,000mAh battery that Motorola claims is enough to power through two full days of use. There’s a total of 512GB of storage in the model I’ve been testing; 256GB of that comes from the internal storage, with the other 256GB coming from the microSD card. The G Stylus 5G has 8GB of memory.

Overall, the performance has been generally okay. It doesn’t feel as quick and responsive when multitasking and switching between apps or playing a game as a flagship phone such as the Galaxy S22 Ultra or the Pixel 6 Pro, but that’s expected.

Battery life has been great. I haven’t been able to get a full two days of use from the G Stylus 5G, but going a full day and well into the next is achievable without any issues. Battery life, in addition to the stylus, are two of the main highlights of the G Stylus 5G.

But where the G Stylus 5G shines is with its stylus support. Motorola has spent a lot of time curating the software experience to add value to the phone whenever the stylus is being used — oftentimes recreating some of Samsung’s magic that made the Galaxy Note line so popular. For example, when you remove the stylus while the phone is locked you can instantly start taking notes; one of my most used features.

A small button hovers over the screen when the stylus is removed from the silo, giving you options to do things like take a note, mark up a screenshot, create a GIF or even launch an app. It’s all very Samsung-like, but with Motorola’s arguably more playful approach and icons. Writing or drawing with the stylus is smooth and responsive, thanks to the fast refresh rate of the screen.

The camera’s performance is okay, but not great. The photos I captured with it were either overexposed or the colors were undersaturated. It’s not horrible, and for a camera on a $500 phone (currently on sale for $449) I’d be perfectly happy with it, but don’t be fooled by the spec sheet listing 50-megapixels and think it’s going to have a camera that’s on par with Samsung’s or Apple’s best phones.

The Moto G Stylus 5G is a fantastic phone if you’re looking for a device with stylus support, that also has a decent, not great, camera setup and exceptional battery life. But if you don’t need a digital pen built into your phone, then you’re better off either waiting for Google’s Pixel 6a or any one of these budget-friendly phones.