The Corsair M65 RGB Ultra is a higher-end gaming mouse primarily designed for FPS enthusiasts, though fans of other game genres can certainly take advantage of its premium features. With a DPI throttle thumb button, adjustable weight, and customization options, this mouse is as a worthy rival to other top-tier gaming mice like the Razer Basilisk V3. 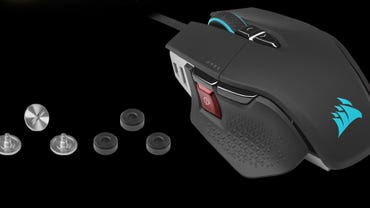 The body of this mouse does take some getting used to, especially if you favor a palm grip over claw and fingertip styles. The M65 RGB Ultra has a somewhat stubby back end that doesn’t support the base of your palm like you may be used to, but instead couches itself in the center of your palm for a more cradle-like grip. While not uncomfortable, it is a bit taxing on your wrist and hand compared to something like the Razer Deathadder V2.

The shortened body also makes reaching the DPI throttle button with your thumb a slight stretch. And again, while not terribly troublesome, the button does sit quite flush with the mouse body, making it difficult to quickly locate it in the middle of an intense firefight to get a more accurate aim with sniper rifles and other weapons that use advanced optics.

The DPI throttle button also sits very close to the other two thumb buttons on the left side of the mouse, which can lead to accidental presses when you shift your grip or want to quickly move your thumb to click one or the other. This isn’t a huge complaint on my end, but it is something to keep in mind when comparing to other gaming mice that feature DPI throttles and side buttons.

Another of the M65 RGB Ultra’s biggest selling points is its customizable weight. It comes packaged with three small weights that can be installed on the bottom of the mouse for a more personalized experience. I recommend either using all of them at once or none at all, since the triangular placement of the weight inserts can make the mouse feel a bit off balance. Without any of the weights installed, the M65 RGB Ultra weighs just 97 grams, which is a fairly comfortable weight to deal with over long gaming sessions and even if you have your mouse pull double duty with work and play.

Each additional weight adds 6 grams to the total, for a maximum of 115 grams. It might not sound like a big difference, but it is definitely noticeable to the point where the mouse feels almost too heavy to me. But I’m also used to working with ultra-lightweight mice like the HyperX Pulsefire Haste, which weighs just 59 grams overall.

At the full 115 grams, the M65 RGB Ultra is hefty, but the added weight isn’t as taxing on the hand, wrist, and forearm as I expected. It’s still fairly comfortable to use and easy enough to move around your desk for quick-aiming, changing directions while driving in-game, or moving in-game cameras around to note opponent positions and objective markers.

As I mentioned before, the M65 RGB Ultra is designed primarily for use when playing first-person and other shooter games. But with the ability to re-map each of the eight programmable buttons as well as the DPI settings, you can customize the layout and responsiveness to suit a variety of game genres. I was able to test this mouse with The Outer Worlds, an action-RPG from Obsidian Entertainment that has you take on the role of a recently awakened space colonist who gets railroaded into a mission to overthrow intergalactic corporate entities that control various colonies.

I normally play both console and PC games with a controller, since it’s more comfortable for me if I’m going to be playing for more than a few hours, but the Corsair M65 RGB Ultra is almost enough to convert me back to being a keyboard-and-mouse user. Being able to remap keyboard commands to the mouse greatly reduced how splayed out my hands were, which is a huge relief if you struggle with carpal tunnel issues like I do.

I made the two thumb buttons the inputs for crouching and melee attacks, while the scroll wheel made it easier to select different weapons and reload them with a click. This kept my left hand focused on movement for evading wild aliens, marauder bandits, and townsfolk I angered (by accidentally stealing boxes of cereal when I was actually try to steal better weapons and ammo) — which, in turn, left my right to handle aiming, shooting, and reloading.

I left the DPI settings at factory base numbers, since they’re decent enough for my personal gameplay style, but you can adjust it in single-number intervals from 1 to 26,000; which is great for ultra-twitchy shooters like Fortnite. I kept the sensor at 1,200 DPI (which is the third default level), which made movement fluid enough to handle fast-paced firefights or to run from giant insectoid aliens without feeling totally out of control. I also kept the DPI throttle button at its default 400 DPI setting, and this helped out quite a bit when using sniper rifles and other long guns with advanced optics.

Each DPI setting is color coded within both iCUE and on the mouse itself, making it easy to see at a glance which setting you’re on. And the DPI selection buttons sit fairly flush with the main buttons and body of the mouse, which reduces the likelihood of accidentally changing settings while adjusting your grip or moving your fingers to use the scroll wheel.

While you won’t be able to have a perfectly still aim in The Outer Worlds, using the DPI throttle goes a long way towards compensating for weapon sway, so you can land headshots and other critical damage moves on tough enemies from a distance. It even helps when shooting from the hip, narrowing your bullet spray so you can actually hit enemy drones or marauders while desperately backpedaling to leave an area that you’re definitely underleveled for.

But for all of the praise I’ve given the Corsair M65 RGB Ultra, there are a few drawbacks I have to mention. Especially if you plan to use the iCUE desktop app for setting up custom lighting and button profiles.

The Corsair iCUE desktop app is your one-stop-shop for customizing all of your Corsair peripherals; from headsets and microphones to mice and keyboards. Corsair has released an updated version that puts all of your peripherals in an easy-to-use dashboard for quickly selecting what you want to tweak. Each peripheral page then has multiple sections for remapping buttons, adjusting sensitivity where applicable, and customizing RGB lighting colors and effects if equipped.

For the most part, iCUE is one of the easiest of these kinds of apps to use when setting up personalized profiles for different programs and games. The biggest issue is that the M65 RGB Ultra doesn’t always play well with the lighting configurations. There were several times when I wanted to switch things up and go from shifting effects to static colors or vice versa, and the iCUE software would not communicate well with the mouse; which resulted in the individual lighting zones getting stuck on a static red color, since the app wouldn’t recognize the mouse in order to apply changes.

This also affected my Corsair K100 mechanical keyboard (which is my daily keyboard for both work and gaming), causing the app to not recognize about 90% of the custom lighting zones and relegating effects and colors to the profile selection button in the very top left corner while the rest of the unit sat with a static red effect.

The fix is simple enough: Just go to the iCUE driver page on Corsair’s website, re-download the app launcher, and click “repair.” It takes just a few minutes to repair the app installation files, so it’s not a terrible inconvenience if you need to reset iCUE and your peripherals.

The bug seems to trigger whenever I went to play with lighting effects or remap buttons on different profiles, which wasn’t often, but still often enough to be annoying and frustrating when I needed to take extra time to repair the desktop app. But if you’re a “set and forget” kind of user who creates profiles and effects on first setup and then leaves everything alone, you shouldn’t have any issues.

With the iCUE app, you can create up to five different profiles and switch between them with just a click within the program. I do wish the mouse had on-board memory like the higher-end Razer mice do, since it makes quickly switching between profiles much easier. Especially if you want your M65 RGB Ultra to pull double duty as a work and gaming mouse. Being able to set up button layouts for Photoshop, Lightroom, and G Suite as well as for my most-played games is a godsend for multitasking during the day and then switching to gaming mode in the evening. However, unless you’re switching programs and layouts every 20 minutes, manually selecting profiles within the iCUE app isn’t a huge deal.

The Corsair M65 RGB Ultra wired gaming mouse is a decently priced rival to higher-end models from Razer and SteelSeries, offering a DPI throttle for precision aiming, programmable buttons and lighting effects, and an adjustable weight to suit your preferences and playstyle. While the body shape does take some getting used to if you favor a palm grip, it’s not uncomfortable to use, even during long gaming sessions or work shifts.

You can customize button inputs and lighting effects in the Corsair iCUE desktop app, though there seems to be a bug that causes communication issues between the program and mouse, resulting in strange lighting patterns. This can be fixed by re-downloading the app launcher from Corsair’s website and repairing the app, but this can be an annoyance if you want to change inputs and effects often.

If you’re an avid first-person shooter player and looking for something to help fine-tune your playstyle or a cross-genre gamer who wants a mouse that can handle a variety of different games, the Corsair M65 RGB Ultra is a great option.

Other gaming mice to consider

The Razer Basilisk V3 retails for exactly the same price as the Corsair M65 RGB Ultra, but it has a few quality-of-life features that give it an edge. The DPI throttle is a thumb paddle rather than a button, which makes it much easier to  find and use it in the middle of frantic firefights. It also features 10 programmable buttons, on-board memory for up to five custom lighting and layout profiles, and optical switches rated for up to 70 million clicks.

The Aerox 5 wired gaming mouse is one of SteelSeries’ newest offerings. It retails for $79.99, though you may be able to find sales and discounts at retailers like Best Buy and Amazon. It features a honeycomb body for strength while reducing weight and a DPI thumb paddle for precision aiming. It’s also IP54-rated for water resistance, so you won’t have to worry about sweaty hands or accidental spills destroying your new gaming mouse.