Three years ago I tried out the massive Unihertz Titan smartphone with a very large physical QWERTY keyboard. I loved the BlackBerry Passport, but the Titan was just too large for me to carry daily and use it to get work done regularly. In 2021, I tested the Titan Pocket which was close in size and design to the BlackBerry Bold so I found it a bit appealing.

For the past couple of weeks, I have been testing an early prototype of the Unihertz Titan Slim and I think someone at Unihertz meant Titan Narrow and not Titan Slim. The Titan Slim is one of the thickest phones I have tested in years, measuring 12.35mm in depth. That’s just 2mm thinner than a folded Galaxy Z Fold 3 and has no business calling itself slim. 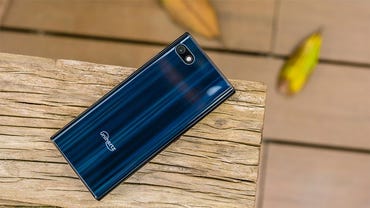 The Titan Pocket is the sixth phone launched on Kickstarter by Unihertz and I’ve had the opportunity to test out the last five. The phones are affordably priced, even outside of the Kickstarter special offers, and target niche segments of the smartphone market. Each one has far exceeded the modest Kickstarter goals and with the Titan Slim we see there are already more than 2,000 backers with pledges almost reaching $535,000 (at the time of publishing this article).

When Unihertz first reached out to me about the chance to try out a Titan Slim, I was excited because I thought it would be an updated version of something like a BlackBerry Key2. I quickly opened up the plain package and almost fell out of my chair laughing at the thickness of a phone with slim in the title. The Key2 measures 8.5mm in thickness, 4mm less than the Titan Slim. Needless to say, this is not a slim or sleek phone.

Now, compared to the other Unihertz Titan phones, this one is sleek and slim, but those other models are massive. The phone is fairly narrow at 67.6mm so Titan Narrow would be a more appropriate name. However, the width of the phone also means that the keyboard is fairly tiny and my aging fat fingers had trouble maintaining any sort of speed on the keys. Someone with small fingers may enjoy the tactile experience, but in 2022 I see no reason for a hardware QWERTY keyboard on a smartphone.

The central fingerprint sensor is functional and also serves as a capable home button. The keyboard functions enabled through the software look like they were copied from BlackBerry with very similar icons when you set up shortcuts. You can establish a massive number of quick launch shortcuts, swipe up and down on the keyboard to scroll through long pages of text and data, and the tactile feel is decent on the tiny keys. The space bar is small, the shift and other important keys are way up on the top row, and there is just too much bouncing around between the keyboard and the display to provide a seamless experience.

Starting at the front, we have the 4.2-inch LCD screen, which is fine for viewing text content on the phone. The colors look great on the display and it’s bright enough for any lighting condition.

The headset speaker and front-facing 8MP camera are above the display. There is an IR transmitter on the top, but despite the phone thickness, there is no 3.5mm headphone jack. There is software included on the phone so you can manipulate remote controls for various electronic products. The USB-C port and mono speaker are on the bottom of the phone.

The 48-megapixel camera is found in the upper left corner with a flash to the right of the camera. The back is cheap, glossy black plastic, and combined with the glossy black sides gives the phone a rather terrible feel. I guess at the estimated $250 price, we can’t ask for too much.

The cameras were rather poor with timelapse, video, photo, and manual modes available. Most images were blown out with poor colors and focus so they may be good for basic document capture or sharing limited photos on social media.

The Unihertz Titan Slim launches with Android 11 out of the box and the prototype I tested has a September 5, 2021, Android security update installed. I checked a couple of other Unihertz phones, and there is no record of updates for firmware or monthly security updates. Android 12 has been out now for nearly a year and Android 13 is right around the corner. Do not buy this phone with an expectation of ever receiving updates, which could pose a security risk for anyone buying this for business use.

The phone runs a fairly stock version of Android. The Google Discover page is available when you swipe from left to right to the first panel, much like a Pixel phone.

In addition to the Google basics such as calculator, calendar, camera, Chrome, Gmail, Maps, Messages, and more, you get a few apps from Unihertz. These include an FM radio, IR remote control app, music player, NoteBook, sound recorder, and Toolbox.

The Toolbox is full of useful utilities that enhance the functionality of the phone. The tools in the Toolbox include:

It’s cool to see the camera used with some of these tools to provide an augmented reality experience that provides you with a device for accurate measurements.

The home screen supports common app widgets too so you can customize your Android experience. The Quick Controls section from the notification shade can also be customized to your personal preferences.

Unihertz appeals to a niche market and it appears there are a few thousand people around the world who are interested in cheap phones with a QWERTY keyboard.

While I did not enjoy using the keyboard, I did like that a BlackBerry-esque interface exists to set up custom shortcuts. It’s also nice to have the keyboard function as a trackpad for scrolling without touching the display.

The phone occasionally locked up and froze on me in settings and some apps. I did not have to reset it though and switching back to home and another app seemed to get out the issue. The stock Android experience is good, but security updates and firmware support are terrible.

I enjoyed the soft-touch matte designs of past Unihertz products and am not a fan of the glossy finish used on the Titan Slim. Fingerprints gather all over the sides and back while the material feels cheap in the hand.

Battery life seemed fine, but I honestly couldn’t keep my SIM in too long to test it out because I did not enjoy the experience of using the phone. Basic network support is provided with no 5G capability. The Unihertz Titan Slim is not a phone I can recommend, but there are obviously a few people who don’t mind spending about $250 to try out something unique.